We sailed from Poole at 0430 Saturday morning in a rising, brisk S/Westerly, arriving at The Folly moorings at 1130 where the owners of Shamal who had sailed across Poole bay the evening before, anchored overnight in Keyhaven pool and drifted up the Solent in the morning, stood calmly ready to take our lines.

Fliss was not far behind followed by the first of two new boats to our summer rallies, Nick and Sally Beresford-Davies (Hyjanorra) who had a quick run up from Lymington.

With the breeze rising steadily it was good to welcome Sunfly. Crossing from Southampton the clew on her aging foresail had ripped out in a heavy gust. She was happy to be in and we were getting a little concerned about the Chichester boats which would be driving into the rising Westerly. Not long after, at 1445, a newly acquired Westerly Konsort arrived, whose Sabre of many years Lyric was sadly up for sale. We began to wonder if we were to see any more arrivals when the first of the Chichester Sabres, appropriately named ‘Spirit’ arrived, casually reporting gusts of 30 kts over the deck, nothing a well found Sabre need bother too much about! Some while later, the berthing master came alongside to report that the harbour launch was bringing a Sabre which had suffered engine failure close to the Cowes cross river car ferry, up to our moorings. This caused some excitement as we wondered which, if any, of the expected boats was going to arrive under this unconventional ‘auxiliary’ power! Twenty minutes later the launch skilfully manoeuvred the second of our ‘new’ Sabres, ‘Grebe’ alongside Hyjanorra while willing hands cheered and tended the lines. Amid all the light hearted banter Grebe’s Crew were made welcome to their first Sabre rally. In the general kerfuffle surrounding this unusual but most welcome arrival, Pelagian had tied up and had broken out an appropriate bottle before most of us had realised they were there!

Considering the forecast, the Met Office’s, not mine, our owners and crew did us proud. Eight Sabres and even a Konsort.

Grebe’s unconventional arrival prompted the inevitable inquest. The engine, a normally reliable old Yanmar YSE12 had been running hard for some hours against a nasty sea and headwind, eventually producing more black smoke than normal and after entering the Medina, had stalled when reduced to tick-over just before the Ferry. It’s refusal to start in this critical location brought the harbour launch quickly to the scene. The problem was dealt with quickly and efficiently. From Hyjanorra’s dingy, we checked the prop for unwanted attachments superficially with a boathook but found none. After cooling down, the engine fired into life as normal. No single, definitive cause was apparent at the time.

The remainder of the afternoon was spent socialising and of course, nosing around the various boats, each one quite different from the others. I was quite taken with the interior of newcomer Hyjanorra because she has been so well maintained and is in as near original condition throughout as I have ever seen a Sabre, with very few modifications made. 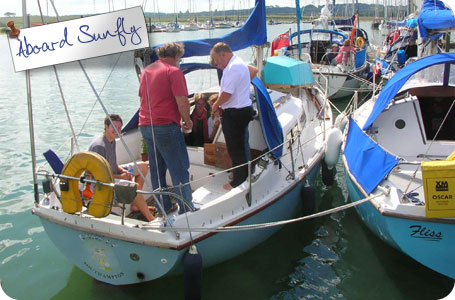 Time soon came to go across to the Folly for our evening meal. The majority of us took the water taxi but the crew of Sunfly offered a lift across in their new, self-built dingy. This was taken up by the crew of Grebe. We were placing bets as to whether or not they would achieve a dry land fall because we could only see about 2 inches of blue transom above the water, I lost my bet, they did.

The Folly came up trumps as usual, we all enjoyed our meals and had a convivial evening. After retiring back across the river, some hardy souls continued their “networking” while those of us who had been up since 04:00 fell into our bunks.

Sunday dawned bright and cheerful. Pelagian left early to catch the tide but the rest remained to continue “Sabreing” for a good while. A chance remark the previous day about inspection of propellers being possible without getting wet by piling people on the foredeck was acted on and all remaining crews were thus deployed on Grebe. To achieve ‘full exposure’ two substantial gentlemen from an equally substantial neighbouring motor boat were recruited to join the pile of bodies jammed on and around the pulpit. It worked, so the skipper was able to properly inspect his new prop and found a knot of Japanese weed around the propshaft and anode, which he removed. Unexpectedly the blades were covered in a fine coat of hairy filaments which had taken less than 3 months to grow. This may well have contributed to the previous day’s overheating problem. Before he left he donned my wetsuit and gave the prop a good wash and brush up.

By early afternoon there was only Corsair and Sunfly left on our pontoon. Sunfly‘s crew went for a row in their new dingy, we had a late lunch and then set off for a gentle sail to our overnight anchorage in Newtown Creek. Another enjoyable rally was over.

The following day we motor-sailed the twenty miles back to Poole against a WSW 5-6.