Mindful of last years debacle caused by a flat spare wheel during the journey from our Hertfordshire home to our mooring in Ridge Wharf, Poole, I checked the wheel before loading the car, noting at the same time the presence of a shiny new 12 volt inflator in the side compartment. Having got underway not long after 0600 Friday we had an uneventful trip, arriving at our mooring in plenty of time to stow things away on board and make the final preparations for this years ‘shakedown’ passage. These preparations were cut short when Andy remarked that, even though my watch said there should be plenty of water to get off our pontoon berth, she did not agree! A quick ‘roll’ of Corsair confirmed her fears and our immediate and somewhat undignified exit was accompanied by much tiller wagging and generous use of the throttle! High pressure over a period of time had depressed the water level in Poole and the winter’s dredging in the little marina had apparently not gone well. That was a bit too close for comfort!

Earlier in the week I had received a call from the owner of the twin keel Sabre Minerva, to say that along with Zenta, they were planning to sail up from the West Country, Plymouth and join the South Coast rally! During our journey down to Poole, he called to say that they had passed Portland Bill and were about 10 miles off Lulworth. A quick computation indicated that we may both arrive in the Solent at about the same time. We would make contact again on their approach to the Needles. I was reminded of the days before the mobile phone when that sort of communication was only to be dreamed of!

We met up with Minerva behind Hurst spit and decided to run up to Newtown Creek, where we were joined later that evening by Zenta and spent a quiet night at anchor. 0800 saw us pushing east towards Cowes against the first of the west going tide. My beloved Stowe Navigator echo-sounder was playing up for the first time in eighteen years and the spare, original Mk.1 Seafarer from the sixties, was reading with an accuracy of plus or minus fifteen feet, so skimming the bottom to stay out of the foul tide was not possible and we arrived at the Folly moorings just before 1100hrs to find Shadowfax waiting to take our lines.

Minerva and Zenta were not too far behind and we were still spacing out the boats along the pontoon when a handsome Sabre, name of Moonscross, hove into sight. We berthed her against one of the other two ‘new’ boats and were still welcoming her owners, when Grebe berthed alongside Shadowfax with confident manner in marked contrast to their unconventional arrival last year lashed to the harbour launch, having suffered sudden engine failure off East Cowes. Grebe now sports a brand new Beta 722 20hp engine and David, a broad grin! The sun was getting into gear and the breeze remained slight to moderate as Spirit was brought alongside Zenta. Spirit of Venus soon arrived, no nonsense single handed as usual, to join the throng. The now customary, Sabreing was taking a strong hold and I had my head in a locker somewhere when the very tidy Sabreon appeared from nowhere and was soon secured alongside Spirit of Venus. Within minutes a very shiny looking Fliss was the fourth Sabre on the next raft. I was wondering whether Hyjanorra would make it, as the owners were hoping to bring their two small children, and they did eventually arrive albeit with young crew suffering a little mal-de-mer.

Eleven Sabres in all with three new boats to the June rally, Minerva and Zenta from the southwest and Moonscross, a fairly local boat. Both Minerva and Zenta are fairly recently acquired and are being worked up as they are being sailed. Minerva arrived with a mainsail that had to be winched up and down due to sticky slides caused, it seems by the previous owner’s inappropriate use of some kind of sealer in the luff grouve and left with the sail flying up like a feather and dropping like a stone! Zenta (fin keel) has recently suffered total rudder failure, now all repaired and better than new. (A few words in Tech Officer’s Report.) Moonscross was in the Association many years ago and came along to see how the land lay. She is a beautifully maintained Sabre with some unique features down below. I would like to think that her owners would join us again to our mutual advantage.

Apologies were received from Tots of Avon, Black Fox, London Apprentice, Luronne, Bristol Sabre and Pelagian. My own apologies to any one I missed, senior moments are becoming more frequent and occasionally things get lost. 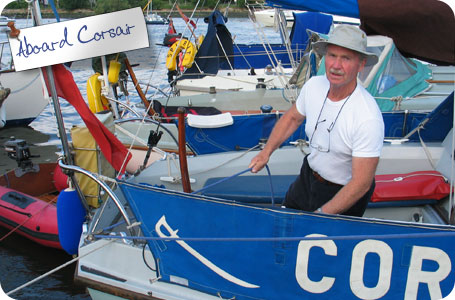 With lively socialising all around I found my attention was inevitably drawn to the ‘new’ boats, each having their own individual features. I am still, after fourteen years of rallying, fascinated by the diversity of construction and presentation of Sabres. The afternoon seemed to fly by and soon the Folly Inn beckoned. As we were about to hop on the ferry it became obvious that in the rush of arrivals we had spaced our ‘rafts’ along the pontoon far too closely and a prudent adjustment was made. The water taxi would have to make do with a little less generous space.

Our table at the Folly was well placed for us giving both good access and views. The food was its usual good standard and a enjoyable evening ensued. Towards the latter part of the evening the very youngest of us found energy enough to dance on the tables in traditional Folly fashion! Not long after arriving back on our pontoon Andy and I found ourselves nodding off, sleep over the last week or two had been in short supply. We retired to our bunks leaving others to continue their evening.

Sunday morning dawned quiet and sunny. Moonscross, Fliss, and Hyjanorra had already taken their tide and Saberon cast off at 0730. After breakfast we discovered that after the Folly meal the young ones had jumped in their dingy and gone up the river to sample the last renditions of the IOW Pop Festival before returning in the early hours! If only…. Minerva and Zenta had decided to stay another day before heading out across the English Channel on their cruise back to Plymouth, so we set about relieving the friction in Minerva’s mainsail hoist.

Somehow the morning had disappeared and Andy reminded me that at 1200hrs we had to leave or hit a foul tide at Hurst point! For us another successful and enjoyable rally was over so we waved goodbye to new and old friends and motored almost all the thirty miles back to Ridge Wharf, Poole against the wind and tide! No wonder our ‘new’ Yanmar 2GM20 shows 2000 plus hours on the clock!