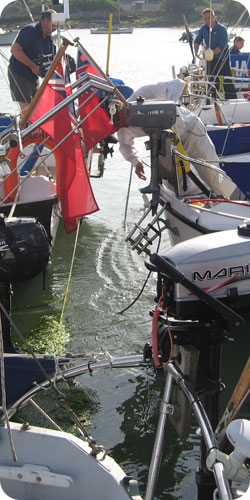 With a large workload this year, see Technical Officers Report, we had just time enough to prepare the boat for the Rally weekend it was our first outing of the year. Friday the 12th saw us doing the final jobs, greasing the winches and tweeking the rigging as we motored along, against the weak Poole Bay tide with very little breeze to assist our passage. Reaching Hurst just in time to take the first of the tide up the Solent, we were able to turn off the engine and sail gently up to our favourite Solent refuge Newtown Creek. We stopped to have a chat with Roy Tall on Spirit of Venus at anchor in the creek and finally dropped the hook in shallow water which by my calculation would allow us to leave in good time in the morning.

Morning found us listing to port, somewhat more than I was expecting, and I sought reassurance by doing my sums again. The tide dutifully arose at the appointed time and I was reminded that this was very much the beginning of the season for us. With no breeze we motored up to the Folly pontoons and claimed our pitch. We were expecting 10 boats to the rally but soon had a call from Ian Brooke of Taganita, to say that unfortunately a family member was unwell and they would not be able to put to sea.

Corsair had not been moored up very long before we were pleasently surprised to see Seabat with Terry McMahon at the helm, he had not let us know he was coming so we were back to 10 boats again. Roy Tall arrived in Spirit of Venus and joined us for a cup of tea whilst we waited for more arrivals. Hyjanorra skippered by our webmaster Nick Beresford-Davies accompanied by his friend Robert Bolwell soon arrived and moored alongside us. Jeff and Sylvia Harwood then arrived in Kilncraft but from an unexpected direction, upstream, they had moored overnight on a pontoon upstream having been told that this was where the rally would be berthed and had spent the morning waiting in vain for the rally to arrive! Nick had a new dingy pump for his birthday and used it to inflate his dingy in record time. Good timing as he was then able to go across to the Folly to collect Bernard (Ben) Hopkins the new owner of Vavrona who lives on the island and has a mooring in Wooton Creek. She is currently having a major refit and is not in commission, so Ben came by road to the rally and had called for a lift over to our pontoon.

Our friends from the west country who came to the rally last year Mike Jones on Zenta and Les and Mathew Phillips on Minerva came to join us again as part of their summer cruise. With the first of the ebb tide Allen and Maria on Fliss with daughter Jade whose 21st birthday it was, accompanied by her small son Jake. As they were tying up alongside Spirit of Venus Derek Smith and crew arrived on Tressa from Gosport.

During these proceedings we had a call from Nigel Challen on Spirit to say that he had suffered a serious water leak and his bilge pump had failed. He and his crew were safe but he had been towed back to Chichester which they had left at 0400 hours to get to the rally nice and early. What a disaster!

We had booked the same weekend as the Isle of Wight festival and all of a sudden the word went round that the Red Arrows were on the way to do their wonderful display. Sure enough they roared up the Medina and we had a ringside seat to the best display that I have ever seen, it seemed to go on for ages, WOW! 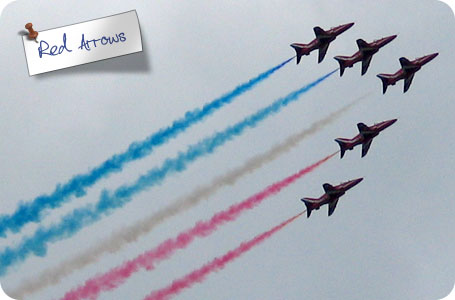 Having had one of our number abandoning their passage to the rally because of a flooded boat due to the malfunction of an engine, we now had an engine flooded by an unfortunate accident, when Allen and outboard engine ended up in the river. Alan had a life jacket on at the time which automatically inflated but sadly not enough to support both the owner and the outboard!

Much ingenious lashing together of boat hooks (four I think) produced a rather bendy ‘prod’ with which sensitive manipulation by Roy enabled the discovery of the exact location of the outboard. Discussions then ensued between the males assembled as to exactly who was going down to recover it. The depth was plumbed and found to be over five meters, what little enthusiasm had existed vanished and it was decided to wait until the morning low tide. I think that it was the berthing master who, having heard of the incident, recommended a local diver who would come and recover it in the morning for £20.00. This offer was accepted without delay.

Late in the afternoon we had an unexpected call from Richard Beattie on Asymptote to say that he had been in Bembridge and he was heading our way, he duly arrived with his Brother and Sister in Law just in time to moor up and cross to the Folly for the evening meal. 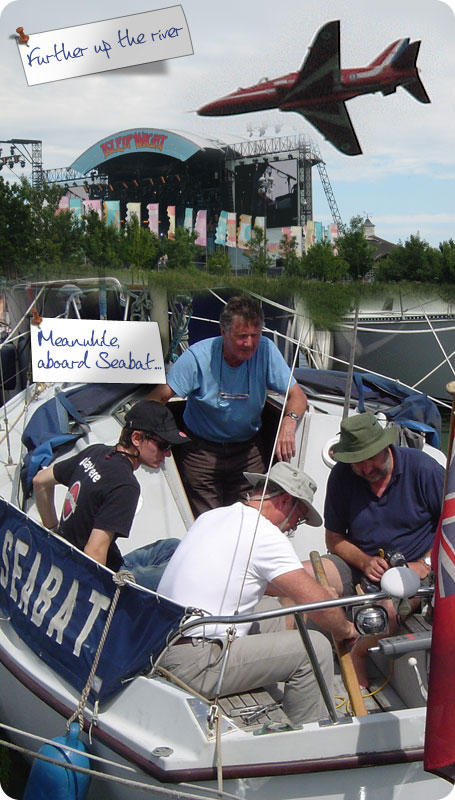 The Folly was bursting at the seams, a party of 25 bodies having arrived without booking not long after us. Unfortunately due to a mix up over numbers and a couple overstaying there allotted time at a table assigned to before I could make arrangements for this to be remedied I found that the booking manager had seated some of our party on another table some distance away not a good outcome. I will have to ensure that this does not happen if we use this venue again.

Duly refreshed we returned to our boats and a bottle or two was shared convivially although I must confess we retired to our berths.

The east going boats took the early tide but there were quite a few boats to continue Sabreing in the morning with the added entertainment of the lifting of the outboard, the diver duly arrived and a crowd gathered to watch the proceedings. It was swiftly located a line attached and hauled to the surface and lifted onto the pontoon by Mathew. The diver took Allen over to the Folly pontoon where it was flushed with fresh water. The fuel system had been closed prior to emersion and after a good spray with WD40 it was running again no worse for wear.

We had added another day to our long weekend and for once did not have to rush off to beat the dreaded tidal gate at Hurst so we had plenty of time to discuss all things boat. Mid afternoon we left to left to keep our appointment with the chandleries in Cowes leaving Minerva and Zenta, who were on a weeks holiday, discussing ‘where next’ with Spirit of Venus who’s skipper Roy, now enjoys the benefits of retirement.