The 2008 autumn rally and laying-up supper was again at Marchwood Yacht Club, on Southampton Water. With sheltered pontoon moorings, a good bar, excellent food and a warm welcome. 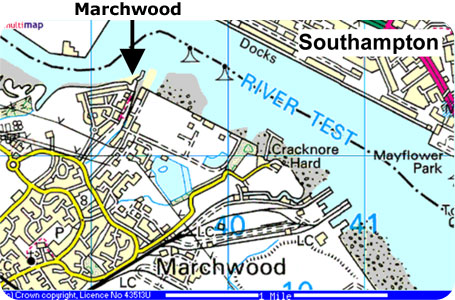 The day was clear and warm, if windless. Romaine and I left the kids behind this time and set off against the tide towards Southampton from Lymington. Because our reliable but old Yanmar YSE12 only manages about 3 or 4 knots, it was certainly slow going, and around five hours later we arrived at Marchwood at dusk.

I found the chug past the QE2 berth and beyond somewhat nostalgic, as I used to trudge up and down the docks as a security guard in my student days, “guarding” the big cruise liners. So monotonous were the appallingly badly paid 12 hour shifts that I actually savoured the opportunity to tell motorists that is was “more than my job was worth” to allow them down one access road or another. Happy days.

As we neared the pontoons of Marchwood Yacht Club we saw the welcome silhouette of Paul Howard waving us in, and within minutes we were tucked up against Corsair, placing our dinner order with Ken Endean.

Unfortunately I failed to make a note of all the Sabres in attendance (confirmation from anyone present would be welcome!) but from memory, attendees were Corsair, Hyjanorra, London Apprentice, Bristol Sabre, Spirit, Asymptote, Shadowfax and one or two others – apologies for omissions. 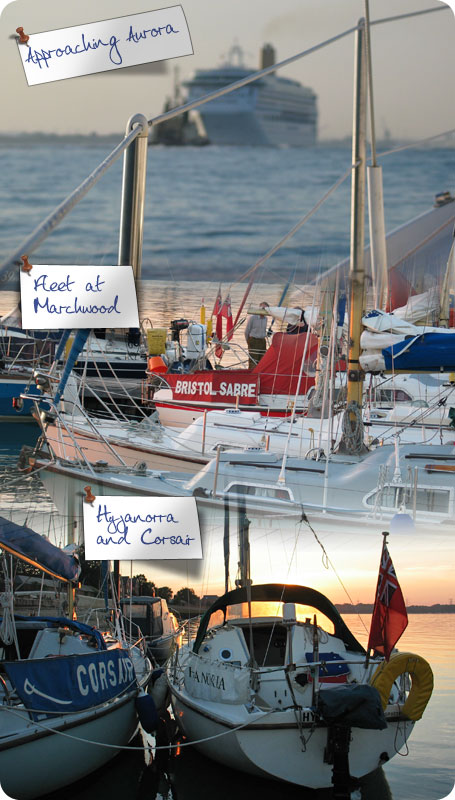 We soon found ourselves ensconced in the club bar (formerly a Royal Naval Barracks) and an evening of food, drink and sailing-related quiz questions (including a game of “pin the propeller on the Sabre 27”) ensued.

The facilities were excellent, despite the massive metal keyrings and lack of signage (I ended up in a couple of dusty old military storage rooms before finding the shower), and a good time was had by all.

Our journey back was equally long, although very pleasant. I always find it exhilarating chugging past massive cruise ships and tankers in a little boat like ours, and we got plenty of opportunities on the way back down Southampton Water. The sausage sandwiches produced by an excellent chef below made the experience even more pleasurable.

Thanks again for an enjoyable, entertaining rally.