A pile of Sabre 27 documents were found in the preverbial locked filing cabinet in 2012. Also found was some Super8 cine footage of the Sabre 27 and her sisters – and these documents. The information consists of the ‘Build Sequence and Instructions’, a ‘Price List – Jan 1977′ and ‘Material Specification’.

The Sabre 27 was designed by Alan F. Hill and the prototype was built in 1969 by Eric White of Marine Construction (UK) Ltd (Marcon). Between 1969 and 1979 some 400 hulls were moulded. The moulds are still in existence and are owned by Brue Yachts of Highbridge, Somerset. Modifications to the prototype were few.

After construction of the first 25 boats (Mark I) the mast was lengthened by 2′ 6″, a consequential modification to the ballast made, the deck moulding altered in the scuppers and the cockpit floor raised slightly. This became the Mark II.

Early in production, the original plywood interior was replaced by a GRP moulding and in the mid 1970’s the deck moulding was modified to include an anchor locker and fixed polycarbonate windows were fitted in place of the aluminium framed sliding windows.

Boats were sold at various stages of construction, from bare hull and deck only, with ‘staged’ kits for home completion, through to ‘fully fitted’ to sail away.

The most recent Sabre was launched 1st May 1999.

Our first Technical Officer, Cliff Woolley produced the ‘Mark I’ handbook in 2001 which took the form of an A4 presentation binder containing general information about the Sabre 27, a section for recording the individual boat’s inventory, sails, engine, electronics, maintenance etc, followed by a section of many useful technical articles either copied from past Rattling Sabres or specifically written for it by various members.

In 2005 a major revision was undertaken by the Association. This ‘Mark II’ version updated the existing format and content and added thirteen new items such as technical specification details, basic drawings, engine replacement, jackstays, locker lids and propellers and so on, bringing the current total to fifty, which now includes hull construction, keels, rudders, rigging (standing and running), seacocks, skegs etc. Updates and additions to our ‘live’ publication are always in the pipeline for distribution to the membership, who are encouraged to pass on their own knowledge and experience to the Technical Officer.

If you’d like to download a PDF version of the handbook, click on the image below. You’ll need a password to open the file which is available to members only. For the password, please e-mail webmaster@sabre27.org.uk and include your name, boat name and membership number. 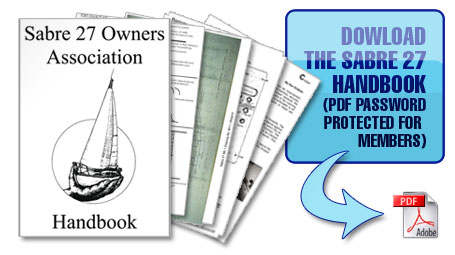 Our able Technical Officer is Paul Howard. If you have any technical queries about the Sabre 27, please click here to visit our forum and post a question to the membership at large or telephone / e-mail Paul directly using the numbers found in Rattling Sabres or the Membership List.