Was this the perfect rally? Fine weather, a very friendly venue, a good meal and even the quiz scores were pretty high!

Nine Sabres attended: Asymtote, Corsair, London Apprentice, Luronne, Sabreon, Scarab, Shadowfax, Taganita and Tressa, while the crews of Black Fox, Grebe and Spirit of Venus came by road, making 26 people in all. Marchwood Yacht Club did us proud, as usual, and their galley girls (cooking, not rowing) were highly efficient. Nowadays, the MYC provides a berthing officer to welcome visitors and he also collects meal orders during the afternoon.

As usual, our members circulated between Sabres and compared notes on equipment before testing their stability by congregating en masse in various cockpits for drinks and nibbles. We took the opportunity to inspect and photograph spray hoods and other canvas additions, for a future article on that subject. 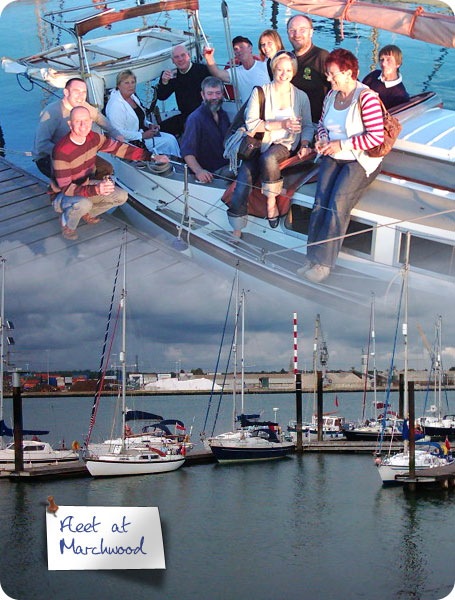 The quiz was won by the team of Karen and Richard Jones and Richard Beattie. They had been warned that the prize was unimpressive but they competed enthusiastically for honour and glory. I think that much of the prize was tipped into Karen’s handbag, so I hope she finds it before it melts (think chocolate).

I suspect that we shall return to Marchwood, if they will have us.